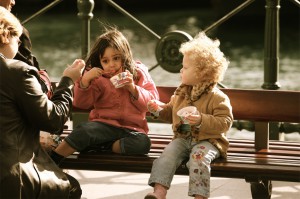 Ice Cream Trivia
*Kids between the ages of 2 and 12 are the biggest ice-screamers, eating more than half of the ice cream sandwiches, bars, and prepackaged cones made each year.

*The first recorded reference to ice cream in the New World was found in a journal entry dated 1744. It described a dinner party at the home of Maryland’s governor, Thomas Bladen, who served a dessert of ice cream made with milk and strawberries.

*The ice cream cone was invented in 1896 by an Italian immigrant named Italo Marchiony, who sold ice cream from a cart on the streets of New York. He received a patent in 1903 for the machine that made these delicious, edible holders.

*It takes about 50 licks to eat a single scoop ice cream cone.